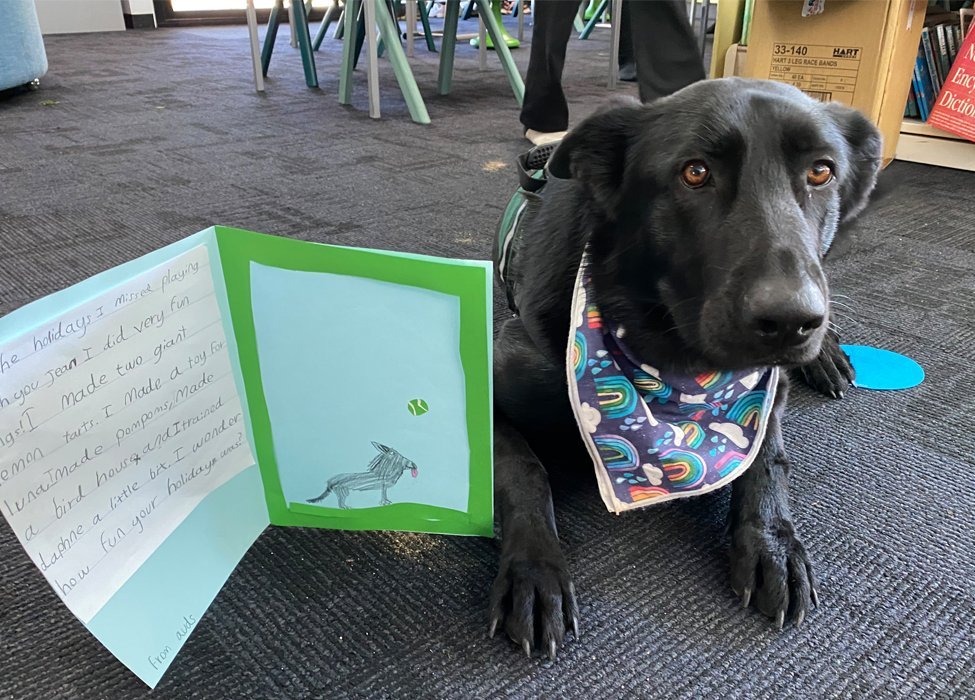 Jean belongs to Thomas, he got her when she was just a puppy. As Thomas started working at Carra PS, Jean was about 8 months old. He hadn’t intended for her to become a therapy dog, but on a pupil free day Thomas was stuck, having no one to look after Jean, and so he asked Marie if he could bring her in. This is what sparked the initial conversation.

‘Marie identified that Jean was quite a placid and gentle dog. We got to talking about, you know…what would it involve, having a dog at school?’

‘We both had dogs as kids that were basically members of the family. We talked about how that was such a powerful thing, and how it helped both Marie and myself in terms of feeling lonely. When you are young you aren’t able to articulate how you’re feeling…the dog is right there and the dog will always understand.’

Thomas and Marie started their research, but found there was little information available.

‘We knew about organisations or agencies that you could hire to bring a dog into the school, but in terms of a member of staff having a dog that was brought to school every day, there was no information.’

Without a clear pool of resources, Thomas and Marie had a large project to undertake.

They began by circulating a survey at their school, giving families the opportunity to voice concerns about Jean coming to the classroom, to a widely positive response. From there Jean was put into training right away. She was assessed by two trainers who confirmed that her personality was in fact, suited to the classroom

‘That made us feel a bit more comfortable that, yeah, we were making the right choice.’ 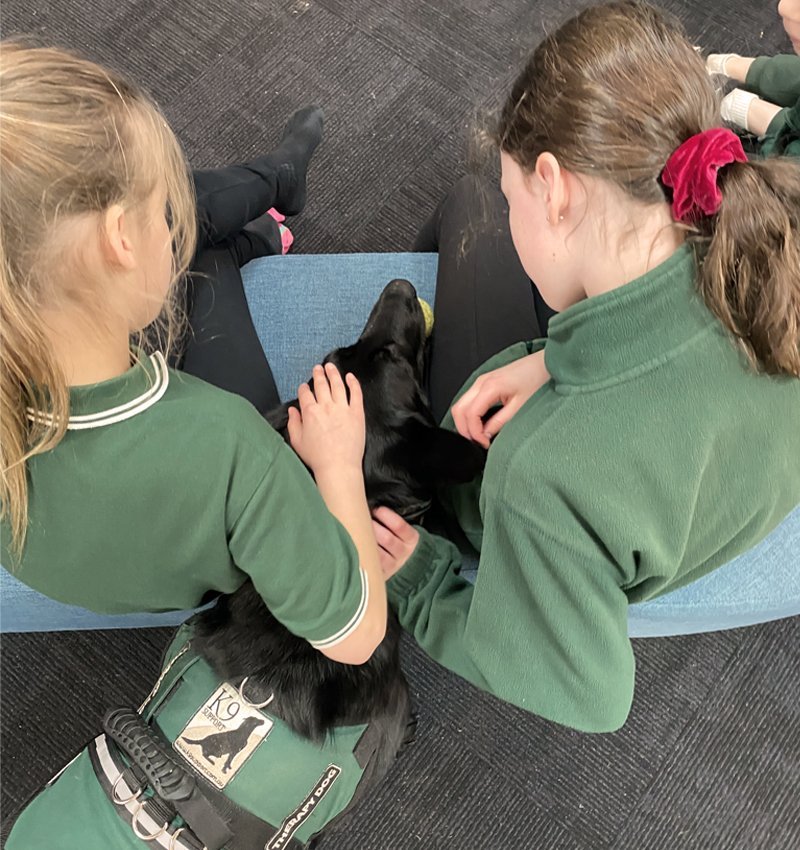 The next step was then to develop the policy and documents necessary to support the idea. For Thomas this was a significant amount of extra work.

‘I had to write up policy documents for the school council to ratify…I reached out to all the organisations I could, to help me write these documents. We even went so far as to speak to the legal department at DET to find out if our public liability would cover Jean, and the answer was yes, if we had a good reason for her being there.’

For Jean, that reason was to support students living with disability. The legal definition of which is incredibly broad.

‘It can count anything from physical disability, like being bound to a wheelchair or it could be coming from a low socio-economic background, so it’s quite a broad classification. We felt that we could justify that.’

As Jean took up her place in the classroom, one of the first real positives Thomas and Marie noticed amongst students was an overall improved attitude to being at school.

‘It was something to look forward to for a few kids, another consistent thing that they could count on.’

As Jean became a regular fixture in the classroom, she proved an invaluable asset for student learning. Improving students’ overall attitude across multiple learning areas.

‘Jean has been the focus of many a story. Her bed at school is plastered with short stories and artworks all revolving around Jean going on adventures, busting into zoos.’

Even in mathematics, Thomas has found Jean’s presence a useful learning aide.

‘We are constantly using Jean as a – to use a teaching term – concrete material. We count her claws, her toes….we discuss how her ears are perfect triangles, what a perfect triangle means. She is, continually, a lovely segway into learning tasks and a way of making that learning meaningful for little children as well.’

‘She’s been a wonderful stimulus for learning.’ 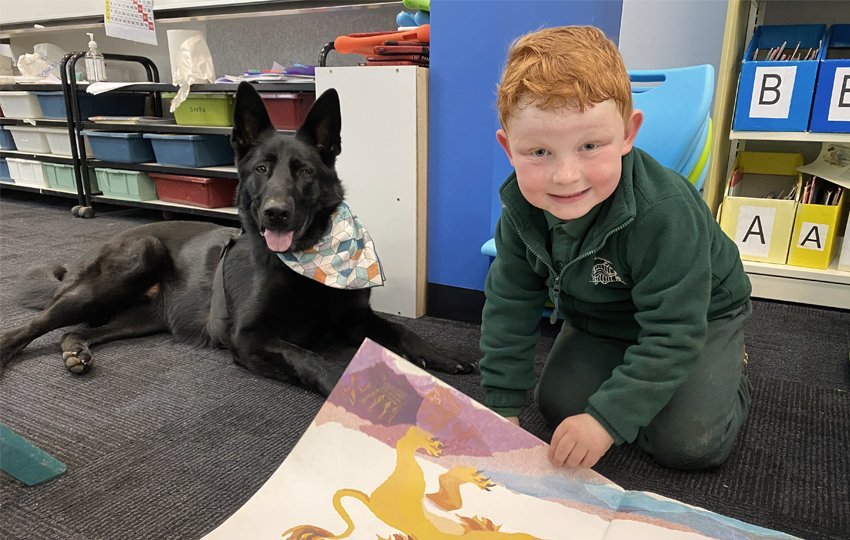 Jean and a student reading together. 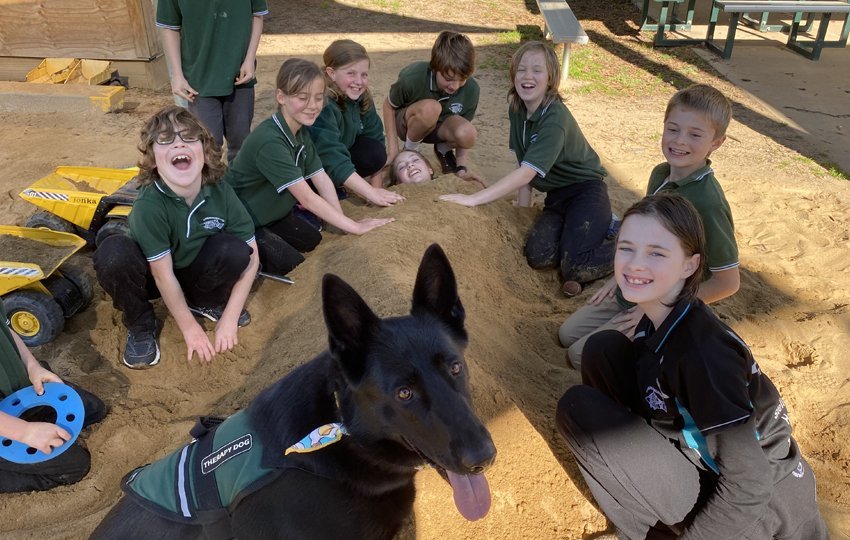 Jean and the students playing together.

Beyond the purely academic, Jean supports the students during recess and lunch as they navigate social settings.

‘Every now and again there will be a kid that is feeling a bit left out or a bit flat and Jean is an available play partner every time. That’s been really valuable for when friends are having disagreements or when the social dynamic in a group is changing.’

Even outside the school setting, Jean’s presence provides students with practical skills for engaging with dogs in the broader community. There were a handful of students who had major apprehensions about dogs, for a number of reasons. Since having Jean at school they have been able to grow more comfortable with dogs by learning about their behaviours.

‘The fear factor is gone. Because they’re equipped with the skills and know-how to read a dog’s body language.’

While there have been a few students at school during remote learning, Thomas acknowledges Jean’s greatest impact has not been felt at this time. However, Jean remains in the minds of Carra’s students.

‘Jean is still very much a part of our correspondences, they ask questions, like how Jean is feeling, and I will share photos of Jean on webex teams.’

Currently only a very small number of Victorian schools are investigating or implementing similar initiatives. While Thomas is first to admit it has added to his workload, he hopes having therapy dogs in schools will continue to gain notoriety.

‘It’s still fairly uncommon but i think schools are starting to wake up to the potential benefits.’

‘It’s a fair bit of additional work on top of what a teacher already has to do…the training is ongoing on top of that, Jean has to keep being reassessed.’

Despite this, Thomas remains certain it’s been a worthwhile venture.

‘It’s an awful lot of work, and it is ongoing, but it has thoroughly been worth it. I absolutely recommend that other schools look into this.’

‘We’re at a point now where we feel like we’ve got everything in place that we need to, and now we can just enjoy having Jean at school.