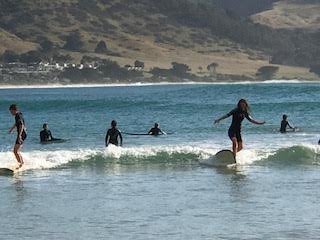 Borne from a desire to broaden their students learning experiences and programs beyond their immediate communities, a trio of schools have forged an innovative partnership based upon their students needs and opportunities.

partnership with an initial desire for their Year 9 and 10 students to have exposure to different environments, recreation and social connections beyond their respective communities. Starting small and beginning as a relatively simple idea, based predominantly on a ‘school camp’ premise, reciprocal three day visits were made to each others community to engage in specific place-based activities that would not otherwise be accessible within their own communities.

Students from both schools were involved in a Year 9 surf -based program at Apollo Bay – providing the Bright students exposure to a rare opportunity when hailing from an alpine environment and students from both schools were then also involved in a Year 10 snow sports program that Apollo Bay students would most likely not have exposure to coming from a  coastal community. Operating over two years, students (and teachers) had ample opportunity to build and maintain new social connections beyond their immediate communities, and also explore the development of joint curriculum programs and therefore enhancing the learning opportunities for their students.

With the initial foundation to an exciting partnership in place, both Bright and Apollo Bay P-12 Colleges felt that there was something missing… that was, a school from an urban environment. To broaden their partnership base, and with the support of the Rural Inspire initiative developed by the Rural Youth Ambassadors, the two school scoured for a like-minded P-12 Melbourne metropolitan school to develop a partnership that could be of mutual benefit to all parties and found Macleod P-12 College.

Facilitated by the Country Education Partnership and Rural Inspire, an initial meeting between all three schools at the beginning of 2016 allowed the schools to compare and contrast their educational contexts and they quickly established common intended objectives and aspirations for their students and staff, despite the schools being geographically, culturally and socio-economically very diverse.

From the outset, all three schools were determined to forge a partnership that is focused on opening up the world to their students beyond their normal bounds. Despite each school already having local and active cluster partnerships, this rural/urban partnership has only further enhanced the learning and opportunities that are already being provided within their respective education clusters. By exploring and sharing further teaching and learning aspirations- Bright, Apollo Bay and Macleod are linking together to ensure an enhanced education provision for their communities, particularly for their middle and senior secondary students.

Currently, the partnership has a number of short term goals:

In the longer term, the partnership has begun to map out their desires, including:

In March this year, a milestone was ticked off for the rural/urban partnership – all three schools had Year 9

students converge at Apollo Bay for their surf camp. Over the four days, students and staff stayed, played and ate together, exploring the maritime environment and forging new and unlikely relationships – all focused on enhancing student learning with a focus on a seaside environment. Students were exposed to a variety of activities that were unfamiliar or out of their comfort zone, including surfing, sea and river kayaking, mountain biking and bush walking. Students thrived in the supportive peer environment and formed strong links with students from all schools.

Not only was this initiative deemed as successful for the students, it also managed to bring together staff from the three schools to share experiences and further forge links. Subsequently, the initial planning is in place for the partnership schools to all converge in term 3 for a snow sports camp based in Bright,  further opening students horizons and providing staff the opportunity to build upon the foundational partnership work already done.

Going forward, it is exciting to consider just how far this partnership will continue to deepen as students, staff and their broader communities become intertwined and innovate educational delivery together to forge reciprocal future endeavours.

This exciting partnership is one that the Rural Inspire initiative would like to see occur in many rural communities, this supporting young people in rural communities gaining experiences and learning opportunities that they may not gain within their own community.

If you are interested in exploring the possibility of your community becoming involved in this exciting partnership initiative, contact CEP.