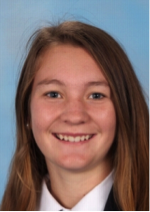 As a new addition to Bush Voices, we will share the progress of young people who gained their education within a rural/remote community – celebrating the great learning that can support these young people in realising their dreams after completing their schooling.

Jemma Walsh is the first young person to have her story shared.

For a young woman just two years on from completing her VCE, Jemma Walsh has embraced a life that by her own determination, has been anything but ordinary.

Growing up in Strathmerton in northern Victoria, Jemma developed a strong appreciation for her rural life. Her childhood was uncomplicated and carefree; she came from a loving home with supportive parents and she not only enjoyed school but she did well. By her own admission, Jemma found that she was able to ‘coast along’ through her schooling until, mid-way through Year 10 at St. Mary’s of the Angels in Nathalia, Jemma had a conversation with the then Deputy Principal, Matt Carver. Having been familiar with the Country Education Partnership Rural Youth Ambassador program, Matt discussed the opportunity to become a Rural Youth Ambassador with Jemma, nominating her to be involved the following year.

On her own admission, Jemma describes the first meeting as a Rural Youth Ambassador in Melbourne as a pivotal day in her life. Meeting peers with similar backgrounds expanded not only her social contacts but also provided a platform to think critically; to have peers question and challenge her thinking; and to be presented with new opportunities and experiences beyond her local community.

As a Rural Youth Ambassador, Jemma developed a range of personal skills and her public speaking skills were enhanced presenting at a range of workshops, forums and conferences representing the voice of rural young people. Most notably though, Jemma attended a six day trip to Malaysia, along with three other rural young people, representing the Victorian Education sectors at the  the Third Johor International Student Leadership Conference involving over 900 students from 95 different countries. It was from this trip that Jemma began t0 really dream and re-imagine her life.

Inspired, Jemma began to embrace the unknown and became more comfortable in living outside of her “comfort zone”. She decided she wanted to become a “global citizen”. She liked that her thinking had been broadened and that for the first time she had a voice that was listened to. In the midst of this, Jemma’s aspirations evolved. Originally interested in post-compulsory study which would qualify her as an Occupational Therapist, Jemma began considering other options, pondering who she could be as a result of the breadth of experiences she was provided with as part of her schooling.

Initially, Jemma participated in an initiative backed by the Sandhurst Diocese, called ‘Alternative Schoolies’ which encompassed volunteer work in the Philippines. Then, taking a ‘gap year’, Jemma travelled to Italy to live with a family as a Nanny, travelling to a number of countries and accumulating lots of life experience on the way.

A highlight of Jemma’s schooling was receiving a VCE Leadership Award along with her fellow Rural Youth Ambassadors, Jasmine Steen from Lavers Hill, in recognition of her leadership within her own rural education community and also contributing at a state-wide level through a range of education focused activities.

Clear that she wanted to remain a truly global citizen, Jemma returned to Australia to take up study at A.N.U studying a double degree of law and international politics, with her ultimate goal to unite education on a global level in order to bring about successful international partnerships.

For Jemma, living, studying and working in Canberra was a logical choice with the Nation’s Capital boasting  embassies, government heads and parliament and she has used her initiative to ‘tap into’ these. Although thinking big, Jemma has retained a strong passion and appreciation for rural life and so emailed MP Damian Drum, the member for the Murray electorate where she grew up to have a conversation with him about how she might still contribute to her home community in her absence. E-mailing back, Damian agreed to meet her at parliament house and they struck a working relationship that has further propelled Jemma’s journey. Knowing not just of her passion for rural communities but also for education, MP Drum encouraged and subsequently endorsed Jemma to become a World Literacy Ambassador for the World Literacy Foundation.

Check out the World Literacy Ambassador role she has undertaken: the_world_LITERACY_FOUNDATION_2_ (1)

Her latest journey has seen Jemma travel to China as of the ANU Eager Learning Volunteer team – a non-profit organization that is dedicated to helping the Left-Behind Children who are not able to learn English in Chinese rural and poverty areas.

This work has not only expanded Jemma’s knowledge and networks but has also fulfilled her desire to stay connected and give something back to rural communities as she works to assist in improving the literacy levels of four low socio-economic education communities across rural Victoria. Thinking global but also acting local across the realms of education, law and international politics has meant that for Jemma she has taken the path less travelled, developing a strong personal philosophy that “education is the key to global collaboration”.

With her next immediate goal to take up a position in the education department at DFAT (the Department for Foreign Affairs and Trade), she may well have ample opportunity to enact this philosophy.