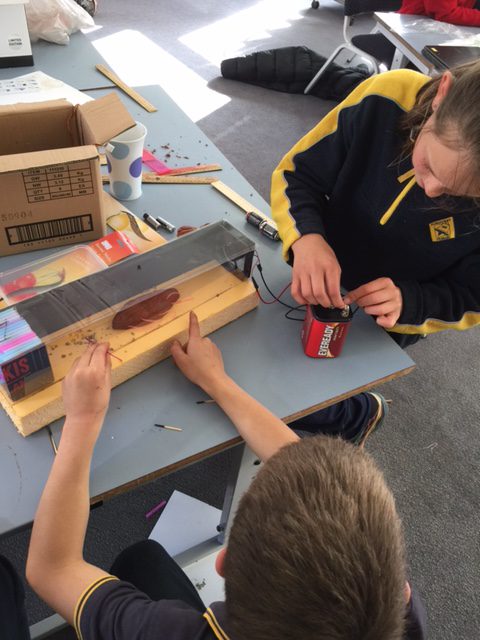 and it was a much loved and well supported initiative. However, with a decline in the school enrolments, entering Energy Breakthrough as a school in their own right became impossible with simply not enough students to make a team.

As a member of the Pyrenees Cluster who were already working in a collegiate manner across many other aspects of their educational delivery, what was Natte Yallock’s project became something bigger; a cluster focus on science and technology utilising Energy Breakthrough as their means of learning. Comprising seven schools- Amphitheatre P.S, Elmhurst P.S, Landsborough P.S, Moonambel P.S, Natte Yallock P.S, Navarre P.S and Trawalla P.S, the Pyrenees Cluster already had a strong history of working together and so, it seemed only logical that Energy Breakthrough became a component of this shared work and delivery.

Utilising a shared workload approach and appointing portfolio leaders for respective curriculum areas, the Pyrenees cluster approach largely works off the strengths and passions of the various school principals. So, with his life-long interest in the areas of science and technology, Lloyd Kennedy was the obvious choice to lead the science and technology curriculum across the cluster.

With small student enrolments at each of the cluster’s schools, Energy Breakthrough was only a possibility if the schools worked collectively- something that was already in-built to their everyday mode of working anyway. From the outset, students within the cluster were enthused at the prospect of building and then, ultimately, racing their very own human powered vehicle, built from scratch- taking their end product and testing it against the human-powered vehicles developed from other schools across the nation.

Coordinating the curriculum design and delivery, and with some experience under his belt having led the Natte Yallock entry for two years previous, Lloyd engaged not just his fellow cluster colleagues, but also the parent body where needed- drawing upon their skills and talents to give the learning a rounded approach.

For many, the tyranny of distance in coordinating a learning project such as this would make for a logistical nightmare, but thinking creatively, the cluster devised a plan whereby students are provided time together to embark on the theory, training and building components of their Energy Breakthrough entry. With the cluster having three face-to-face cluster days each term, Lloyd is able to utilise some of this time (beginning mid-year), working on the Pyrenees Cluster Energy Breakthrough entry. Additionally, they also make use of video-conferencing and each year, one or two camp-outs are held, usually on a Friday night so students can train in the evening and then build and refine their vehicle during the day on Saturday.

Central to the initiative, the Pyrenees cluster students build their human-powered vehicle from scratch each year with adult guidance but minimal adult intervention. Along the way, they explore key technology concepts such as aerodynamics and friction and then are able to build, test and refine their learning as they build their vehicle. Students are also challenged to think more broadly than just science and technology as they consider training regimes and healthy eating plans, fundraising and their presentation that must be made to the event adjudicators at the Maryborough event. For students, not only are they engaged in real and powerful learning, they also have an opportunity to socialise and bond with peers that assists in bridging the isolation that they sometimes encounter in a rural setting.

Most recently, students from the Pyrenees Cluster travelled to Monash University where the students were able to analyse the aerodynamics of their 2016 vehicle; testing it in the largest wind tunnel in the southern hemisphere. University students involved in the “Monash Human Power” team as well as university staff were on hand to explain to the students what was happening and how to identify the strengths, as well as areas for improvement on their vehicle. A full size foam model of this year’s potential vehicle also spent time in the wind tunnel in order for the Pyrenees students to detect faults prior to the mould being made.

Students have followed up this visit by constructing small wind tunnels during science at a cluster day to trial small-scale designs and their aerodynamics. This year the goal is to reduce the weight of the Pyrenee’s vehicle by at least five kilograms by building a super light-weight carbon fibre chassis within a carbon fibre and Kevlar fairing.

Though the results of the Energy Breakthrough event in Maryborough is not the main focus of the program, it is worth noting that In their first attempt last year, the Pyrenees Cluster team finished second in the primary school division and aim to at least maintain this position in 2017.

Natte Yallock PS principal and team leader, Lloyd Kennedy has declared that any and all avenues for technical excellence will be explored. “The goal is for our students to realise that with passion, commitment and effort, anything is possible.”

If your rural education community has an innovative science approach, let us know, we’d love to hear about it and Happy National Science Week!