A Racing Spectacle Under the Blazing Deni Sun 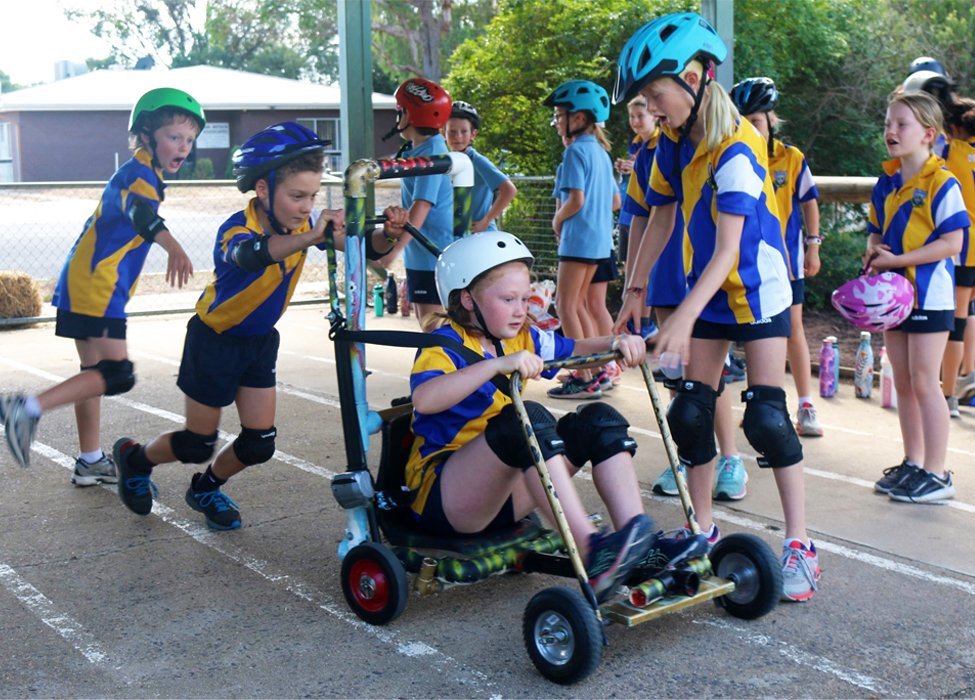 The event was created as a local solution to the COVID-19 cancellation of Maryborough’s annual Energy Breakthrough (EB) Festival, which is usually attended by thousands of students each November.

In Deniliquin, classroom teacher Christine Downing was determined to plough ahead with her school’s EB program, and so was born the first Deni North Pushcart Spectacle, with tremendous success.

Granted, some last-minute modifications were required to overcome the heat of the day– but sprinklers on course and icy poles in hand made the triumphs of the occasion just that little bit sweeter.

On the track, it was something of a rite of passage, with last year’s EB team, the Deni Dragons (now grade 5), taking on what should have been this year’s Maryborough teams – the Deni Destroyers (grade four) and the Deni Demons (grade three).

Racing in front of a Covid-safe crowd, and just as their names had foreshadowed — the Dragons, Destroyers and Demons were ferociously competitive, sapping every bit of physical energy across a program of four races. 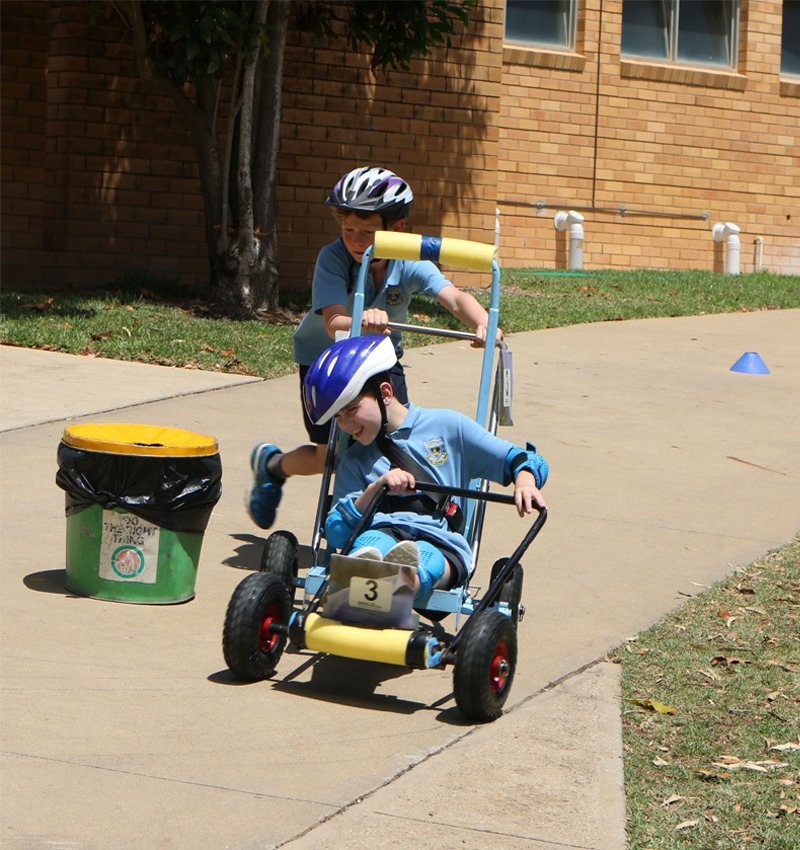 The Dragons showed their experience during Race Three; the obstacle course.

So, how did they go?

First for the day was the Endurance Race — running up-hill, towards the school from the front gate, twisting around buildings, a stop near the library for changeover of pusher and rider, and then down the side straight, back to the front gate for the next changeover.

Endurance? It certainly was — the Destroyers even had two punctures to contend with but they refused to concede, pushing-on with some wilting wheels. First across the line was the Deni Dragons in a time of 9.21 minutes.

Race Two was the highly anticipated rally-race, with the Destroyers finding atonement on a set of borrowed wheels, closing out the contest in 4.15 minutes – after which they happily received some new wheels to finish the day.

Race Three was the obstacle course: a tricky track on a steep section of pathway, riding around cones, and then up a sharp incline to the half-way mark of the race: a rubbish bin. Back down the incline, around another bin, down the path of cones and around the garden to the end changeover. Points off for hitting cones or the beloved bins.

This time it was the youngest team, the Demons, who claimed a near-perfect run (no penalties recorded) with a winning time of 4.32 minutes.

And, finally, Race Four was the coveted Sprint Race, conducted across three heats, with teams belting up and down the basketball court as fast as their legs (and wheels) would carry them. By this point, all competitors were fatigued but there was no telling in their gritty performances. Fastest time: the Deni Demons with 2.38 minutes. 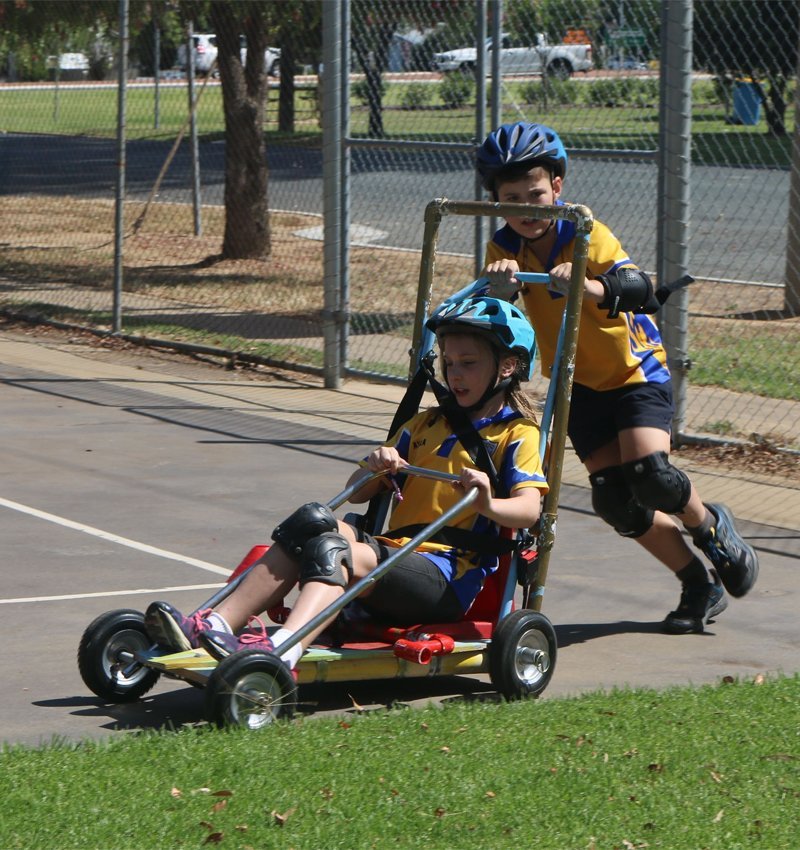 The Destroyers burning around a corner on the basketball court.

But it didn’t end there.

Having conquered the racing component of the day, the teams headed into the gloriously airconditioned school hall to demonstrate the build of their pushcarts. They quickly hopped to work, deconstructing, and then reconstructing their carts from scratch. Unfortunately, the Destroyers had trouble getting their frame ‘square’ and paid the price on the clock.

And then it was time for the presentation videos; a final wrap-up of their year’s work, with the Demons and Destroyers displaying all the effort that had gone into their EB program in 2020 – and all in spite of a global pandemic, home-schooling and social distancing!

Exhausted but immensely proud of her students’ efforts, Christine Downing says attention has already turned to next year, with her tenacious teams planning to head south to Maryborough for universal pushcart glory. 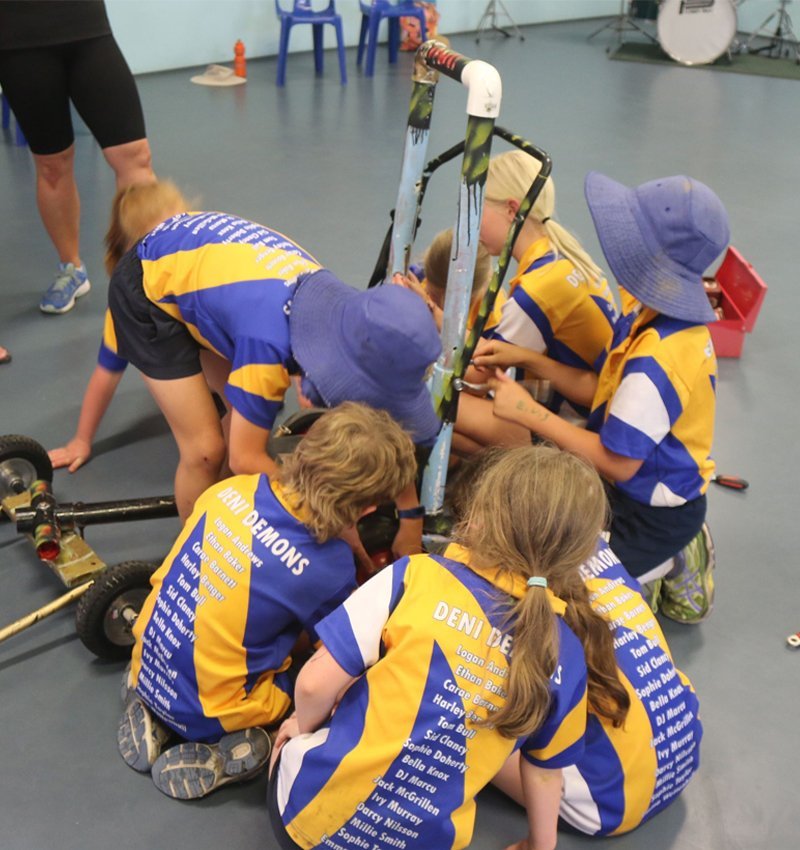 Teamwork was critically important during the Build and Display component. 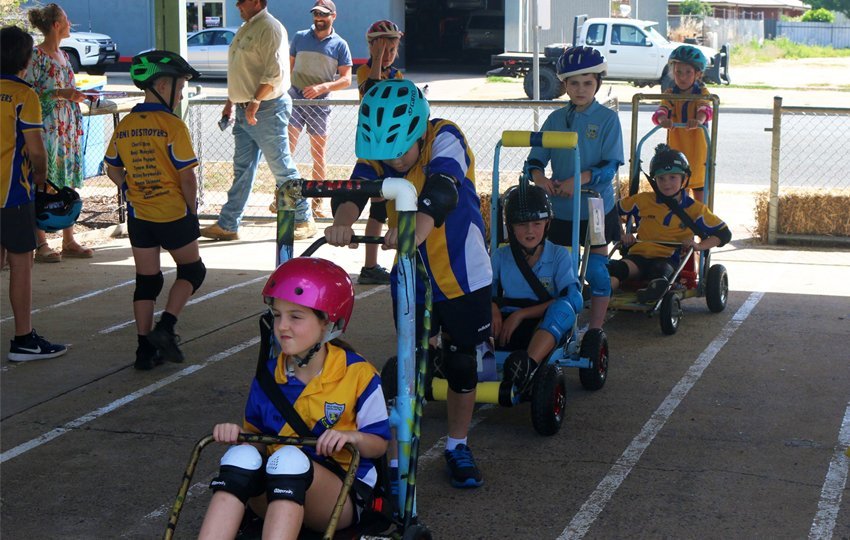 Ready to rumble, ready to race! 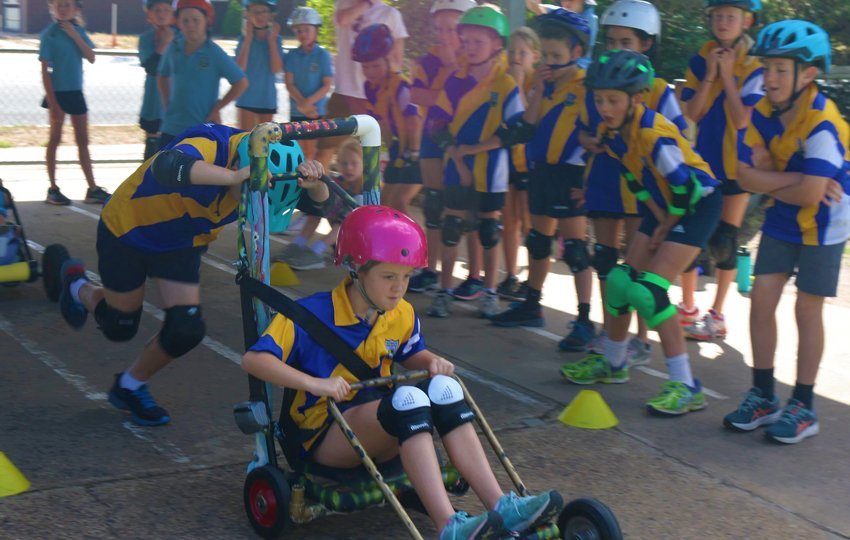